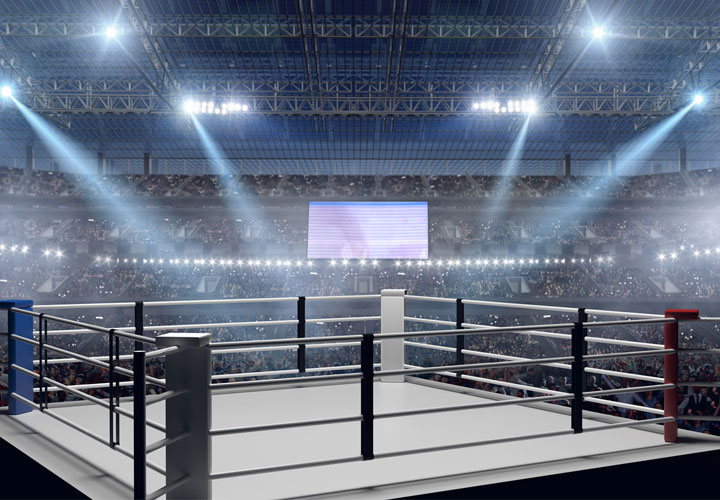 California was once the hotbed of boxing at the turn of the 20th century and throughout its stint as the mecca of boxing it has hosted some of boxing’s best epic battles, superfights, and legends. There are hallowed grounds in California for boxing but to keep it relevant here are the three best fights the state has hosted in the last 20 years.

In 2000 welterweight champ Oscar De La Hoya, a native of Los Angeles, was 27 years-old and already a superstar in the sport of boxing. He had already defeated living legends, Genaro Hernandez, Julio Cesar Chavez, and Pernell Whitaker and was coming off of a disputed decision loss to fellow future hall of famer Felix Trinidad in 1999. Meanwhile his rival from the amateur days, another LA native named Shane Mosley had just stormed through the lightweight division as champion and was making a run at welterweight. The deal was made and the Staples Center in the heart of downtown Los Angeles, a fitting site for what may have been LA’s biggest fight. It was a hard-fought contest that saw both men give as good as they got. Mosley, the slightly smaller man was constantly pressuring De La Hoya and used his speed to make up for the height and reach advantage De La Hoya possesed. Mosley was undefeated and by the end of the last round he had just delivered the golden boy his 2nd loss as a professional, propelling himself to the top of the boxing world.

The two would fight again with De La Hoya dropping another controversial decision three years later, which many felt he won. The two would go on to work together outside of the ring as promoters under De La Hoya’s Golden Boy Promotions and promoted record-breaking fights in terms of numbers of pay per view sold for an event. Though they are both retired and hall-of-fame-bound, Southern California fans won’t soon forget their competitive rivalry and their first fight that had the audience clamouring for more.

In 2013 Timothy Bradley was coming off the best win of his career, a decision victory in 2012 against Manny Pacquiao and became the new welterweight champ. He should have been riding an all-time high on top of the boxing world however his victory was shrouded by the criticism of the scorecards after the fight. Typically when a fighter climbs the mountain and reaches the top, his next fight is usually a “soft touch” or an opponent with little threat to his recently acquired title. What he got was a fighter named Ruslan Provodnikov, nicknamed the Russian Rocky after his battle with Bradley on the night of March 13th in the Home Depot Center in Carson. Provodnikov was an up-and-coming boxer with a bull-like approach to wearing his opponents down. However his only loss at the time came against the one time he stepped up against a fellow top contender.

Both men came into the fight with a chip on their shoulder and with something to prove, what followed was one of the best fights ever seen at the legendary Carson arena. Early in the fight it was clear that Provodnikov was willing to absorb any punches coming his way so that he could land his own. Bradley was supremely athletic and while he was never known for his punching power, his speed, combinations, and toughness would transcend any disadvantage against Provodnikov. The first round told a story of the rest of the fight in a way, Bradley won the first part early on but in the middle he stood toe-to-toe and Provodnikov took advantage and landed big late. At the end of the first round Bradley was hurt by a Provodnikov hook and fell to the canvas, but it was ruled a slip, however he was so stunned by the force that he fell back on his bottom when he tried to get up and then nearly fell over again! Still it was ruled a slip and the fight continued with both men trading combinations. By the eighth round both men had sustained heavy damage and Provodnikov’s eye was swollen, by the end of the ninth he was bleeding profusely from a cut under it. Throughout the fight both corners had warned their man that they would stop the fight, but as grueling as it was neither man let up. Provodnikov was taking more punches but Bradley continued to look out on his feet throughout the fight, at times seemingly unconscious but somehow his arms threw punches and his legs kept him upright. In the twelfth round Provodnikov was losing the fight and needed a miracle and desperately let out a barrage of punches, his final stand. Time was winding down and with 30-seconds left Bradley again looked dazed and ready to fall but he stayed up. Then with 20-second Provodnikov landed a big right that stunned Bradley again but remained standing. Finally with 13-seconds left Provo waded down a rain of punches on Bradley who was forced to take a knee, the only knockdown of the fight. Ruslan was so exhausted that he could not celebrate over Bradley when he was down, and with less than 10 seconds to go Bradley arose and the final bell rang.

It was like a movie, the up-and-coming puncher from a distant land got his shot at an undefeated champion who just shook the world but had yet to prove his warrior spirit. Then this fight happened, Bradley’s name was chanted by the same crowd of people that booed him when he beat Pacquiao the year before. The crowd also cheered on Ruslan, who nearly dethroned the champion if there was only more time on the clock.

At the end of 2018 there were conceivably three heavyweight champions on the prowl of the heavyweight ranks, and two of them decided to fight it out for dominance. Deontay “The Bronze Bomber” Wilder and Tyson “The Gypsy King” would fight each other on December 18, 2018 in what was the first heavyweight championship fight hosted in the LA Staples Center arena in nearly a decade. The heavyweights had come back to LA and the drama that unfolded on the night of the fight would live up to expectations and provide an everlasting moment in boxing history.

Without a doubt Wilder had risen through the ranks as the most devastating power puncher the heavyweight division had seen of his generation and captured the WBC heavyweight title in 2015. Meanwhile, Tyson Fury had well established himself as the best boxer in the realm of men over 200 pounds. Fury had once outboxed the former undisputed champ Wladamir Klitschko in 2017, previously Klitschko had not lost a fight, much less a few rounds since in ten years. The fight would go the 12-round distance with Fury taking an early lead and winning the majority of the rounds. In the ninth round Wilder’s power shone through when he dropped Fury with a straight-left and a straight-right combination. Fury was game and got up without issue and seemed to have the fight won going into the twelfth, that’s when the real drama ensued. Fury came out all 6-feet 9-inches of him bouncing on his toes, and across from him plodding forward was the 6’7” Wilder looking for one big shot to change the outcome of the fight, and he found it 33-seconds in the round. Wilder landed his patented right-cross that began Fury’s descent followed immediately with a left-hook that removed any conscious thought from Fury’s head. Fury lay there, eyes open, knees up, arms at his sides, and his face hosted a cold stare towards the lights. Boxing “experts” watching from the couch in their living rooms knew that look, so did the ringside professionals, Fury was out. Then boxing scripture unfolded before our eyes as Fury rose up from the dead mat below him and got to his feet at the count of 9.99. The Bronze Bomber was forced to watch as his knockout victory slipped away and he watched the Gypsy King rise, and then proceeded to the final bell. The fight was declared a draw, the two knockdowns proving to be the difference between the loss for Wilder and a win for Fury, but the fans were the winners and LA is the scenery of one of the heavyweight divisions biggest nights.