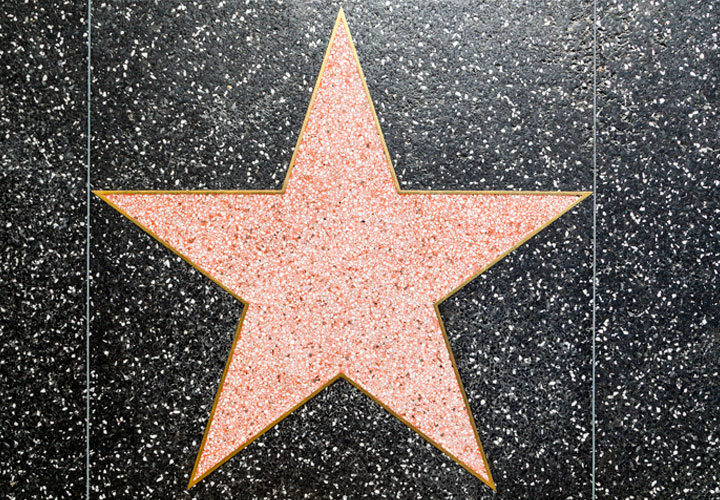 There’s a $40,000 bill to consider before you submit a proposal for a star on the Hollywood Walk of Fame, and a wait-list longer than the current 2,500+ stars that are enshrined on the sidewalks in Southern California’s legendary attraction.

Now, $40,000 may seem like a lot but in reality you’re essentially buying real-estate that will bare your name on what has been deemed a Historic-Cultural Monument in L.A. Not to mention the company your name will be in, splashed across terrazzo-bronze flooring with the likes of Walt Disney, Bert Lancaster, and Bruce Willis, to name a few of the thousands immortalized on the very ground L.A. residents and tourists walk on. Every year the Hollywood Chamber of Commerce, the governing board that the city of L.A. adheres to for all things on the Walk, selects about 30 celebrities to bestow the honor to while hundreds are denied and asked to try again the next year.

The Walk has been around for nearly 60-years and was first proposed in 1953 by Hollywood businessman E.M. Stuart. He’s from that era in which two-initials sufficed as a first name. So it was ol’ E.M. who proposed the idea of the Walk to, “Maintain the glory of a community whose name means glamour and excitement in the four corners of the world.” As far as what inspired the idea of etching the names of celebrities in stars on the ground, some suspect it could have something to do with the old Hollywood Hotel which once had the names of celebrities written in stars on its ceiling, though it is not confirmed.

Initially it was proposed that caricatures of the celebrities be included with their name and the star engraved on terrazzo flooring. However it was determined that the caricatures would be too difficult to add, and not to mention hideous and tacky in retrospect. Luckily, the Walk of Fame is grounded with sensibility and respect for those real men and women who have contributed to Hollywood culture, except for the fact that it totally allows fictional characters to receive stars on the Walk as well!

That’s right, stroll down Hollywood Blvd. and take a gander at the stars of Lucille ball, Jimmy Hendrix, and Woody the Woodpecker. Seems legit, right? Here’s the thing though, the rules do not specify that the recipient has to be a living person, or ever existed at all. In fact there are over 17 fictional characters currently occupying space on the Walk of Fame, including Snoopy, Bugs Bunny, Tinkerbell, The Simpsons (all of them), and even the eco-terrorist/kaiju-king Godzilla.

Strange enough though if you do wish to nominate a person post-mortem there is a mandatory 5-year waiting period before they can be considered. You know, to make sure they’re really dead (I guess).

There are 5 categories that a person, group, or figment of imagination can achieve stardom:

These categories are designed to encompass the entirety of show business and have changed over the years. Originally there were 4 categories with Live Theatre/Performance added in 1984 by legendary TV personality/producer Johnny Grant. Grant was named an honorary member of the Chamber Committee that supervised the Walk in 1980 after he received his own star and contributed tremendously to vitality of the Walk. He became a staple at the presentation ceremonies and when space began to get crowded on the designated walkway of the stars, he approved the idea of adding a second row of stars to run alongside the other stars which free’d up over a thousand spaces. He sat on the committee that reviewed and determined the recipients of the stars on the Walk.To nominate someone you must include the following:

Additionally there is judging criteria that each nominee must meet:

Professional achievements
Longevity of 5 or more years
Contributions to the community
A guarantee that the nominee/celebrity will attend the ceremony.

Here’s the thing, even after all of that it is still up to the discretion of the committee to award a star to someone. That means that you can have the best resume on the block (literally in the case of the Walk of Fame) but you may still be shunned by the committee which reserves the right to select anyone from its list of applicants and can change their mind at any time. The criteria acts more as guidelines which is why in the first class of nominees submitted in 1956 of over 150 applicants, Charlie Chaplin was left out of the graduating class to stardom. Chaplin began his motion-picture career in silent films in 1914 and revolutionized comedy in films, hell he WAS comedy in films, he was funny before sound! He co-created the United Artist distribution company which gave artists the rights to their own work, he wrote, produced, directed, acted, composed music, and received 3 academy awards in his life. His name will ring in the silent halls of black and white films and is recognized as a comedic genius. Yet Chaplin did not receive his star on the Walk of Fame until 1972, meanwhile Mickey Mouse got his in 1978! Mickey may be a revolutionary character but he only had 1 hit black and white movie (under a nom de guerre) and as far as I know, he didn’t win an academy award for it. Probably because he’s not real.

So if you’re looking to get yourself on the Hollywood Walk Of Fame or are looking to nominate someone, keep in mind that you have to beat out legends who assumed iconic roles, non-living characters that real people have to dress-up as to receive the award (fingers crossed that they nominate the giving tree next), and even after all that, come with $40,000.

Here’s Why California Isn’t In The 2020 Pro Bowl