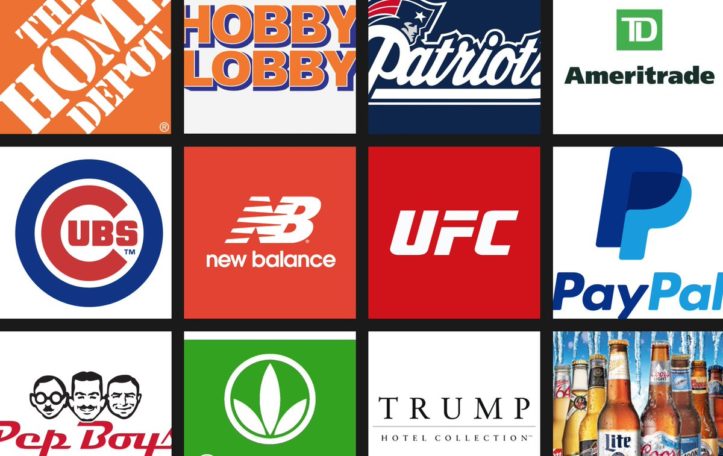 Politics involves a lot more things than just votes and policies. If you’ve been anywhere near the news for the past month, I’m sure you’ve heard of all the companies whose names are being dropped, for the sake of showing their support of President Trump. Some are reacting with “not my president,” while vowing not to visit these places until they change their allegiance. Celebrities like Chrissy Teigen and other social media users are calling out these companies and calling for their cancellations if they do not comply. Amongst the listed are many go-to favorites of Americans around the states. According to BET, here are some of the supporting companies:

How, you may ask are all of these companies supporting him? They are sending in donations and donating towards fundraising events, that amount to over $200. President Trump is forced to disclose that information, because of what happened with Watergate. A popular site called Good Unite Us, which is female owned, will show someone exactly how much a certain individual or company donated to a political campaign. The app has over 4,000 different companies and brands listed, and can break it all down based on their donation. Furthermore, the app will show percentage wise what has been donated towards either the Democratic or Republican party. According to the BET article, “Trump has already received $43,814,715.72 in contributions for his re-election campaign.”

In addition to the companies who have donated towards the President’s campaign, here are the ones that have ALSO voiced their support for him:

At a site called #grabyourwallet, you can find more companies on the list of supporters. The site states their name, type, why it’s on the list, customer service phone number, corporate HQ phone number, general email, PR contact, twitter handle, the action required to be removed from the list, and the last inquiry sent to that company. In addition, the app also provides alternative places to support, if you are unhappy with the ones that are supporting the candidate that you dislike. Other sites that are a big help during this time are Zippia and the Buycott app. So no matter what side you support, there is technology and resources out there to help you have an informed decision on which companies and brands you’d like to continue to support, or instead denounce.